The new works at the Center for Cuban Studies/The Cuban Art Space by Mabel Poblet and Ernesto Rancaño illustrate to date the most refined and distilled use of personal visual lexicons by these acclaimed Cuban artists.

Only 25, Mabel Poblet's work demonstrates an artist’s use of her own body in her art without necessarily making herself the subject.  Her body serves as a mirror of sorts into which our own truths, expectations, and frustrations are reflected.

This accomplishment is derived from a rich Cuban tradition that started with photographer Marta Maria Perez and Ana Mendietta in the 80s.  In the 90s when Tania Bruguera conducted an installation art workshop in Cuba, Mabel Poblet participated in the workshop for more than a year.

In Poblet's new mixed media works, a shiny layer of acetate squares raised in relief by thousands of tiny nails works in concert with a background of posterized photographic self-portraits on silkscreen produces  an effervescent, translucent, and otherworldly quality.

In contrast to Poblet’s outspoken, in-your-face work, Rancaño’s works  are quieter, more subdued.  His works may evoke otherworldly feelings by limiting his palette, his subject matter, and by juxtaposing unexpected metallic elements like fish hooks.

The most obvious traces of Cuban origination in works by Rancaño and Poblet's can be found in the way they limit their color pallet to bright red and/or black and white.  But in addition, Poblet’s concern with her  origins occurs in an early series entitled "Lugar de Origen."  Rancaño, on the other hand, has said that all of his work addresses Cuba, in one way or another—but more as hints than in direct revelations.

As mentioned above, both artists have a highly personal visual language system of signs and meanings that seem intentionally impossible to decipher.  Mabel Poblet offers the following explantation:

The difficulty of deciphering Poblet’s work is also due to the fact that she intentionally tries to express visually that which cannot be expressed verbally.  “‘In many instances”, she states that “we have in mind thoughts that we are not able to represent with writing but with an image we can express them. Particularly the series of photographs spring from the theatricality of postures and color. Where there is evidence of a tragedy of a thought process made static, related to human mis-communication."   Her new work deals with the sign language of emotions and abstracts ideas.

By transmitting these feelings, she provokes those same feelings within the viewer so as to suggest that everyone is a protagonist in the drama of our separate and collective emotions.  Though more subdued, Rancaño’s work also can be very aggressive.  Ascension 2006 shows a white ladder with a thousand spiny protrusions that will slow, if not thwart altogether any inclination to ascend.  Strangely, viewers are beckoned to climb.  When we look at Abrazos Prohibidos, his series of female figures that are turned away from the viewer and transfigured with jarring elements, he seems to draw viewers in rather than to elicit the kind of repulsion suggested by the title.

The interview with twenty-two year-old Cuban artists Marlys Fuego is much shorter than the others from the Cuban Art Space Interview Series, but in few words gives us an interesting glimpse.

Marlys Fuego doesn’t convey the sense of struggle and determination that defines many of the other Cuban artists who were interviewed for the Interview Series (e.g. Rocío García, Sandra Ceballos).

Her older colleagues had direct experience during two tumultuous decades of economic disaster. The lives of this older group were marked by crisis, and the art they created was both a response to and a refuge from those difficult times.

Younger artists like Marlys Fuego came of age at the tail end of Cuba's “Special Period” of economic crisis, which began in the 90s after the Soviet Union's collapse. She and other artist colleagues are taking full advantage of the new possibilities afforded by Cuba's flourishing art scene.

These young artists look beyond Cuba for inspiration, and now that the US is offering to travel opportunities Cubans, artists are among those most sought after for travel to the US and Europe.

Havana is the metropolis of Cuba art and draws talented young artists like Marlys from far-flung provinces (Las Tunas, in her case) who hope to findartistic recognition in the capital and beyond while working with like-minded artists.

The creative collaboration between Marlys Fuego and Cuban artist William Pérez (with whom she moved to Havana from Cienfuegos) exemplify this trend in Cuba, but with a romantic twist: they have become artist couple/collaborators.

(Note that Mr. Pérez is another artist from the Cuban Art Space interview series).

We will want to follow these two and so many other talented artists on collaborative journeys into the future...

Marlys Fuego González was born in Las Tunas in 1988. She lives and works in Havana, Cuba. She will be showing her new works in September 2011 at The Center for Cuban Studies/The Cuban Art Space. 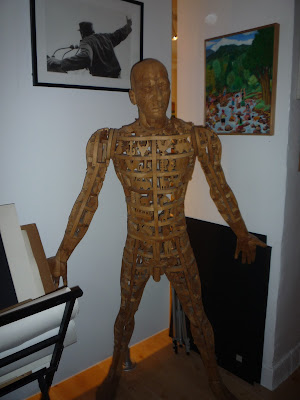 My favorite piece at the Center for Cuban Studies is a sculpture by Cuban artist William Pérez. It is a wooden mannequin made up of tiny carved pieces that resembles a kind of human-scale 3D puzzle. When I look at it, I am reminded of how we are the sum so many random and often contradictory thoughts, desires, expectations, and impulses. It is only by a miracle of the mind that we can make coherent sense out of all the parts and keep ourselves from falling to pieces.

Such a Herculean effort is required to make sense out of the incendiary rhetoric in America about Cuba. But if you aren't up to the task, the Center for Cuban Studies is here to help.

In June 2010, the Director of the Center for Cuban Studies, Sandra Levinson (as well as videographer Jenny Hellman), sat down with Mr. Pérez to do an interview (see interview below) about his art and the vicissitudes of the art scene in Cuba.

Halfway through the interview he is asked about how he manages to work in such a small studio. He looks around his tiny work space and states that "a fish grows according to the aquarium in which it lives."

This struck me as an apropos metaphor for how the Cuban government has allowed the arts to flourish in Cuba.

Unfortunately, most Americans only hear the hackneyed, Cuban exile-driven discourse about the lack of political freedom in Cuba. But artists like William Pérez and the numerous other artists interviewed in the Cuban Art Space’s interview series offer a refreshing counter-narrative to this viewpoint.

Indeed, the Cuban aquarium has provided Cuban artists plenty of space in which to swim.

To be sure, early in the revolution Cuban government had a more ambivalent attitude towards the arts than it does now. The Beatles were famously outlawed, we recall. But that was before John Lennon wrote You Say You Want a Revolution. ;)

If we were over-cynical, we might claim that Cuban artists and the Cuban government supporting them are just capitalizing on the temporary buzz about Cuba in an ever capricious international art market.

That may be true, to some degree. But watching Mr. Pérez’ interview and the other Cuban Art Space interviews, --> click here for more Cuban artist interviews <-- we learn that the Cuban government’s support for free arts education goes back decades.

Behind the wonderful, imaginative, and sui generis art coming out of Cuba is the free education, scholarships, and institutional support of the Cuban government.

Furthermore, as Mr. Pérez explains in his interview, Cuba is rapidly expanding the dimensions of its creative aquarium, giving more space to artists for workshops, galleries, and allowing the arts to blossom in neglected and overlooked spaces that the government does not have the funds to restore.

Just as much as Cuba’s well-documented success in the fields of education and public health, the success of Cuban artists like Mr. Pérez serves as an excellent advertisement for the overlooked positive narrative of the Cuban Revolution.

The Center for Cuban Studies won a landmark lawsuit against the US Treasury Department in 1991 (Dore Ashton v. Newcomb) that made it legal to import Cuban artwork. Ever since, the Center has been an epicenter of access to the contemporary world of Cuban art for curious Americans.

Please check out the interview (which I translated/subtitled) with Mr. Pérez below.

Cuban artists are not, in fact, asphyxiating in a tiny communist aquarium. On the contrary, it is we Americans who are trapped inside the thick glass of a failed foreign policy that keeps the wonderful artistic renaissance of Cuba just beyond our view.

In a few weeks the Art of Mella show at the Center for Cuban Studies comes down. My favorite painting from the exhibition is the one by the famous painter El Estudiante (The Student) called US-Cuba that depicts a Cuban and an American boxer in caricatured forms in front of an anxious crowd.

It is a perfect metaphor for US-Cuba relations.

The Cuban Revolution began like a boxing match between the United States and Cuba. But even though the bell rang a long time ago, we are still trading punches.

It started after Fidel’s triumphant march into Havana with his army of guerillas in 1959 when the task of governing cast light on the inequities inherent to the system of land and property ownership in Cuba.

Fidel burst out of his corner by enacting land reform and seizing property owned by US sugar companies. POW!

Then the Eisenhower Administration retaliated by refusing to process crude oil in Cuba from the Soviet Union at refineries owned by the United States. WHAM!

But Castro responded with an uppercut and nationalized all U.S. properties. WHOOMP!

Then the United States pounded Cuba with an economic embargo. The crowd wonders, is it a TKO??? Nope. Not by a long shot. Even today, during the Obama Administration, we're trading punches with Cuba. USAID worker Alan Gross was recently arrested for bringing  electronic equipment to Cuba in violation of Cuban law.

He got caught, and now the US expects the Cuban government to release him. If they don't, the US will retaliate by not easing travel restrictions for Americans. At least, that appears to be the case as of April, 2011.

Nearly two months after the announcement by the Obama Administration that travel restrictions were being eased, the Treasury Department still has not followed through. Meanwhile, we Cuba travelers are anxious for the fight to finish.

Of course, the tragedy of this boxing match caricature is that, with the Cold War over and everything, Cuba and the United States don’t have anything to fight about. The generation that lost all their stuff is gone and the new generation is ready to let bygones be bygones.

Hang up your gloves fellas. The fight is over! Fellas? POW! WHOOMP!

The Center for Cuban Studies is a 501(c)(3) tax-exempt organization, and all donations to the Center are tax-deductible. Donors to the Center are among our most-valued members because they help to insure that the Center’s mission will be fulfilled -- normalization of relations between Cuba and the United States which permit full cultural and educational exchange.